A major scientific revolution is in progress, yet you might never have even heard about it. Copernicus removed us from the centre of the universe, and Darwin demoted us to clever naked apes, but this time it is good news beyond our wildest imaginings.

500 years ago it was Nicolaus Copernicus who set in motion the first great scientific revolution. He established that the Sun is the centre of the solar system, and thus the Earth was never the centre of the universe. The charming idea that us humans are of central importance in the universe was shown to be quite false. Scientific infancy was over.

300 years ago Isaac Newton brought about another radical shift in people’s understanding of the world. With just three fundamental equations he showed that the universe operates in a completely predictable and rational manner, like a giant clockwork.

200 years ago Charles Darwin demonstrated the evolution of species. This initiated another tremendous shift in society’s understanding of nature because it directly implies vast tracts of time in the past. The world was not created just a few thousand years ago.

100 years ago the new physics ushered in a further new age of scientific enlightenment. But this revolution is incomplete because our view of nature has not been updated. Although the science is superb no one knows what it really means. As the great physicist, bongo drummer, safe cracking hobbyist and all-round genius Richard Feynman famously said of quantum theory:

This, of course, is a bit of a major setback for the noble science of physical reality. As physicist Nick Herbert wrote in his book Quantum Reality:

So what is the problem? In a nutshell, quantum theory tells us that the world is only real when it is observed. This means that instead of the ordinary world as we understand it, this is a ‘relative world’. In other words it works like Einstein’s relativity. Relativity shows us that time and motion are only defined relative to an individual observer. In the relative world of quantum mechanics, the physical reality of the world itself is only defined relative to the individual.

This is the type of world demonstrated in QBism, the latest interpretation of quantum theory. The world is real only where observed. And this has now been confirmed in recent experiments. But it remains highly controversial because it is so impossibly absurd. It would seem to raise more questions than it answers. Surely, the world must be all there? And anyway, just looking at physical reality can hardly have an effect on it. It sounds more like magic than physics. Which of course is why physicists get wound up about it, and there is absolutely no question of this being taken seriously.

The resolution is simple but deeply counter-intuitive. As my work demonstrates, the real world is indeed the ordinary world, all solid and real and there. And we know this because this is the basis that gives rise to the relative world. The relative world is like a special effect, brought about by being in many of these worlds all at once. Technically, the result is a ‘holographic universe’. As described in this article, that gives exactly the effect of the QBism world. And this is the type of world in which one actually lives

So our understanding of the physics as defining the ordinary world is perfectly correct. That is what everything is made of. But the relative world is real also, being a superposition of many of these worlds. That is the new idea in a nutshell.

So the great puzzle is solved, leaving a different kind of puzzle. How can we possibly get our heads around that? What that is like? What does it really mean? The aim of this blog is to explain it all as simply as possible, using the minimum of science required to make it all make sense.

There are a number of big ideas that go together to make complete sense of this, and when they are clearly put together we get a new and fully coherent worldview. It is weird but it all makes sense.

And we strike gold. Quite unexpectedly, the new worldview is not only empowering in everyday life, but also leads to the solution to the tremendous global problems facing our human culture. The scientific enlightenment is hugely good for us.

It means that one is of central significance in one’s world. Expectations are constantly directing the Bayesian probability of what is likely to happen in the future, globally. And we can pilot this phenomenon deliberately, and even with skill, rather than blindly and randomly. In a way you could say there is a God and its you! But as Gurjieff was famous for saying, we are mostly asleep.

This is only one of the remarkable implications emerging which transform the meaning of life. The objective of this blog is to make these concepts fully available so that everyone can enjoy the benefits. The physics is described in detail at AvantGardeScience.com. The book tells the whole story in a more narrative form.

Thanks for reading and 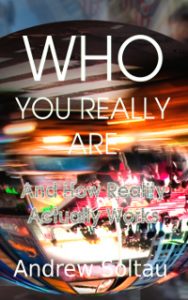